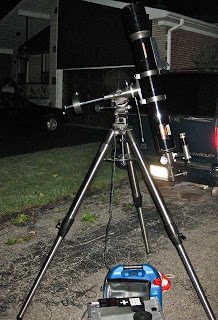 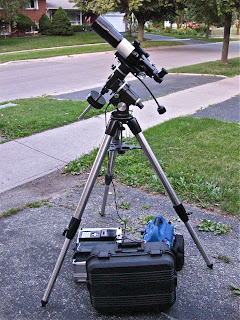 Once again I have to add the disclaimer (if anyone actually reads it) that this blog is not a review site, it is a blog for the observer and about observing, but from time to time, something will find it's way to me that I just have to mention, and this product from TPI or Telescope Performance Improvements caught my eye the day Dave Yates dropped it off for me to look at.

The spreader is easily attached by a removable ring that is connected by two screws (six in total) and is attached just above where the two inch leg terminates. The connection is firm with no give but it is important to attach it slightly above the end fitting where you loosen the leg. That gives the spreader it's *snap* into position. The particular spreader was designed around the Synta made CG-5 or EQ6 tripod with 2" steel legs. I am sure other tripods will work like the Mead standard field tripod, LXD75 and others with 2" diameter. The spreader itself is well made and very strong. Once attached it's easy to fold away. I have not taken a picture of that folded up but it works extremely well. You don't have to remove it for storage, it folds up very neatly. Effectively this spreader replaces the dinky spreader that came with the tripod. The old spreader was the one you continuously tightened up until the cows came home and even then, you were never quite sure if it was stable. In reality, it just kept the legs from collapsing in on themselves, it was not really a leg spreader in principle. You can still use it, but do you really need it? I prefer to keep my eyepieces in their case, not on the dinky spreader

The "snap" and the tray:

I mentioned that the new spreader needs to be installed above the end fitting or bracket where you would loosen off the locking nut to extend the tripod. Here's why although I should make a video of it. Essentially what happens is that you have a little bit of "snap" in the spreader which spreads the legs out a little further and locks them into place without fear of collapse. That little bit extra spread gives the tripod more stability. The CG-5 tripod, although already stable, under heavier loads is now even more stable with this addition, like a rock. Attaching the tray is fairly simple too. That is the beauty of this product, it's easy to work with. The tray is attached through a single screw and bracket that attaches to one of the tripod braces. Easy. Just make sure you have it centred properly. There is a circular hole that the spreader fits very nicely into in the centre of the tray. You might have to work it a few times just to get it centred, but it is straight forward. 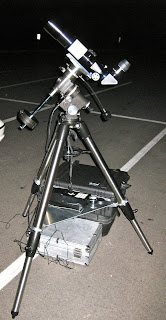 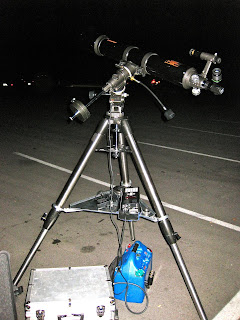 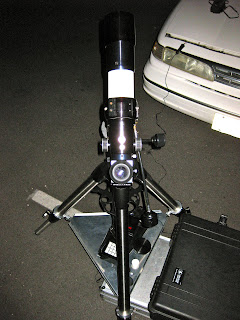 My two *prime* scopes, the SP-C102 and Tele Vue Pronto both mounted on the Super Polaris equatorial head were tested out at Saddington Park last week to see how the new combo of the spreader/tray and tripod worked. The old Refractor had it's dampening time reduced with the new tripod and now even more so with the tripod locked down better. But it's still a long dampening time of about five seconds. But it is sway that is the problem, not vibration. Obviously the problem is not in the tripod, but somewhere else. Add to the fact at f/9.8, the tripod is fully extended, adds to the dampening time. Still, it seemed a bit easier to focus the f/9.8 OTA which was a relief (not to mention it's recent collimation too). The Pronto however was a different story. Dampening time is now about 1.5 seconds which is incredible. Easy to focus and since the tripod does not need a full extension due to it's short focal length, the scope is a rock.

I love the tray. It's BIG and it has plenty of storage. Not only that, but it will support a full sized battery to further anchor down the tripod. That's right, a big 12v lead acid battery can be loaded onto it. I chose not too. I am so confident in the tray, that I would rather put my eyepieces or charts on it. Nice little chart tray with a modest sized chart like the Pocket Sky Atlas or Cambridge Double Star Atlas.

Weakness in the link:

It's not all good. Instead of like most dreams and aspirations, this one is not a top-down pipe dream. The rebuilding of my observing platform has been bottom-up, exposing flaws as we go along. With the TPI spreader and tray, it has revealed that the last major flaw is the mount head itself. Lets face it, a 20 year old EQ head is going to have it's jiggles and the C102, that is a problem. I could get it all tightened or re-machined, but why? At this age I could just swap it out completely. The motor is failing and it would cost nearly a third of an EQ6 mount to get it replaced by Vixen. Plans to upgrade the mount head are not on the table just yet, but with the spreader/tray, the weakest link has been exposed.

Excellent product by Dave and Gary of TPI. I would highly recommend anyone getting it. Retails around $299.95 for the complete spreader/tray combination. Worth it for your rig.

Here are some additional images of the improvements: 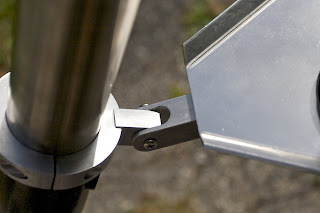 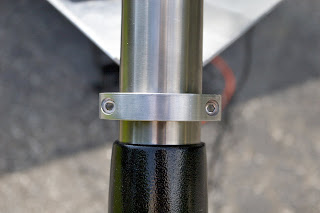 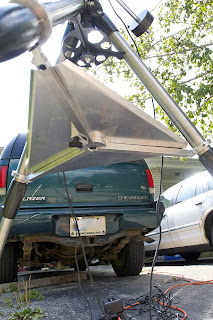 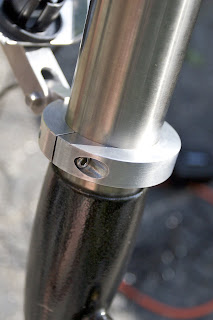 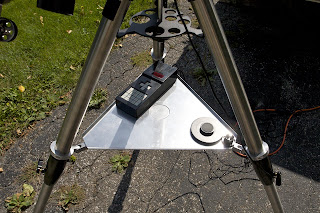